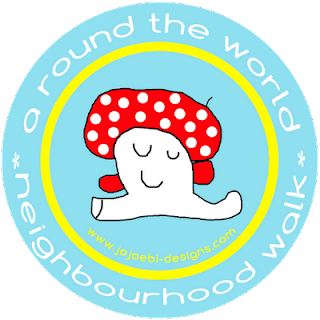 Welcome to Cambridge. It is probably raining - so I'd put on your waterproofs and wellies. The weather is quite unusual at the minute as Cambridge is normally one of the driest cities in the UK. Cambridge is in the east of England, about an hour by train from London and is most famous for its university. It is one of the most expensive places to live in England and one of the flattest (no idea if the two are related :) ) 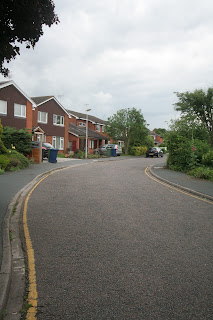 Here is a typical street near where I live which is on the outskirts. These are 60s built houses - not pretty but functional. There are lots of families in the area. More typically in the centre are Victorian terrace houses with very small gardens. 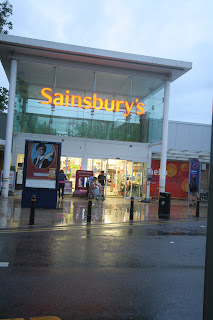 Here is a local shop - well a corporate giant local shop but it is near our house and we go here both to do weekly shops and to pop in to replenish bread and milk. There is a shortage of good local amenities near us - we do use a local cake decorating shop to buy icing gels and I like a rather expensive Italian deli! Both Sainsburys and Tescos have opened "corner shops" fairly near us too much to local people's outrage - but people must be using them as they seem to be always busy. 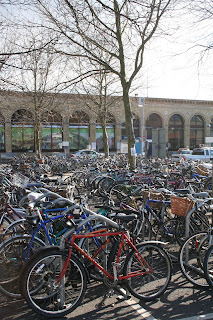 Bikes are the best way to get around - it is flat with lots of cycle lanes. We can hire them from near here (the station) You must lock up your bike though (or it will get stolen) and I would recommend wearing a cycle hat (and trying to cycle on the correct side of the road helps). Cambridge is not so good for cars - narrow streets limit parking and cause congestion. There are also buses and a controversial guided bus. Right hop on your bike and lets cycle in to the centre of Cambridge. 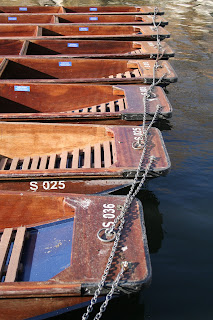 The best way to see the tourist sights of Cambridge is to go by punt.  There are several different companies offering trips and their touts regularly seem to get in the local paper for fighting with each other for business! However we will hire one ourselves (don't worry I have bought lots of beer  - it is mandatory to drink and punt :) ) 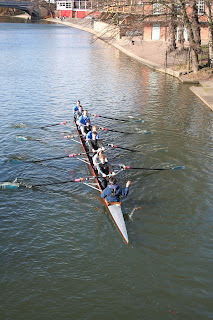 Here is another typical Cambridge "mode of transport". Many many students row on the Cam. I met my husband through rowing - so it has a special place in my heart! 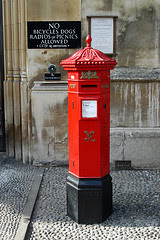 Standard red British post box - apparently there are actually several different types of red Pillar box type and this is a Penfold Hexagonal postbox. This was the standard design for UK Post Office boxes between 1866–1879. I like its shape! It is outside King's college. 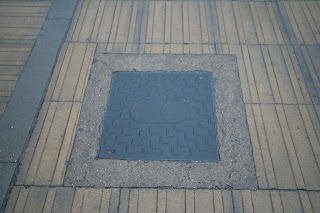 Here is a very plain and boring manhole cover! It was raining and I forgot to take it in portrait - sorry! 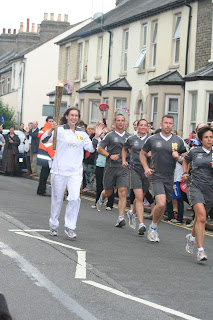 Whilst I was out and about preparing for this walk the Olympic torch came to Cambridge.  Did you know the torch has 3 sides to represent this being the 3rd time the games have come to London and the 3 words of the Olympic motto ( Citius, Altius, Fortius  or for those of us who don't speak Latin Swifter, Higher, Stronger). It also has 8000 holes for each of the people carrying it. This lady carried it for 300m before passing it on to the next person. 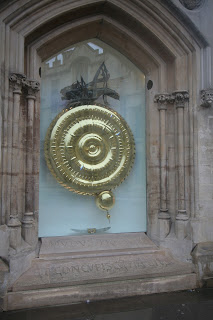 In the middle of Cambridge is this piece of public art.  It is a mechanically controlled clock owned by Corpus Christi college. The face is a gold-plated  disc, about 1.5 meters in  diameter. There are no hands or numbers, but time is told by blue back-lit slits in the clock face. At the top is a locust which moves its mouth, appearing to eat time itself. 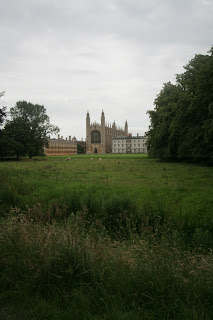 No tour to Cambridge would be complete without looking around the colleges. This is, I think, the most iconic view in Cambridge - King's College from the backs. King's was founded in 1441 by King Henry VIth. The chapel was built over a period of a hundred years (1446–1531) and is actively used as a place of worship and also for some concerts and college events.  Just remember not to walk on the grass! 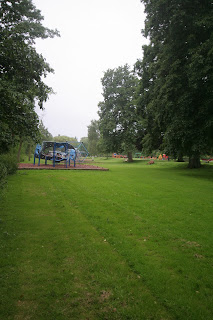 For the children, here is a park. It is a good cycle ride away from our house but we like it because it has things for a variety of ages to do. There is also a paddling pool open in the summer (with an ice-cream kiosk). It is well used and maintained. 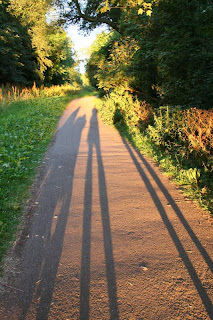 We will just cycle a little further along the river Cam to a village called Grantchester which is said to have the world's highest concentration of Nobel Prize winners! Before you go home you must partake in an English tradition of afternoon tea here at the Orchard which is a teashop where the poet Rupert Brooke lived and wrote The Old Vicarage, Grantchester: the final lines immortalising afternoon tea in the Orchard: Stands the church clock at ten-to-three And is there honey still for tea?


Thus when you have finished tea and returned your bike to the hire shop our tour around Cambridge is over. I hope you are have enjoyed yourselves!

Email ThisBlogThis!Share to TwitterShare to FacebookShare to Pinterest
Labels: blogs, cambridge things to do

Things to do in August